Thanks for stopping by mitziflyte.com! Follow the links below to continue in your scavenger hunt, then head to link #11 to record your findings and gain entries into our drawings for 3 gift cards. Happy hunting! 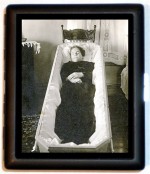 You’re living in 1849 and attending the funeral of a prominent person:

The black hearse is being pulled by four black horses; black ostrich plumes atop each horse’s head match the plumes on top of the hearse. The glass paneled sides of the hearse reveals the dark coffin inside, its fittings gleam brightly among the mass of flowers. Some mourners walk, some ride in carriages. The solemn procession winds its way through the streets of the deceased’s town, making sure to go through areas of the most visibility. The size of the hearse, the number of horses and mourners alert all to the fact that an important person has died.

The male mourners are dressed in dark suits in the fashion of the day but their outfits include a wide black band around their hats and black gloves. Female relatives of the deceased are in black crape and wear only jet jewelry. They carry handkerchiefs edged in black and dab at their eyes as they move toward the cemetery. The wearing of a black dress and a veil began with the superstition that the spirit returning for a loved could not recognize her dressed in black.

The deceased probably lay in his or her home before the funeral procession. The funeral service itself may have been performed in the home. Because family and friends may need to travel distances for the funeral, the deceased probably lay in the coffin for several days. Candles and flowers are used to mask odors in the time before embalming. A large funeral meal of ham, cider, ales, pies and cakes is served to the mourners. Mourners have received cards edged in black, announcing the death and the time of the funeral.

In wealthy households even the servants would observe a period of mourning. Clocks in the house are stopped at the time of the death and curtains drawn. Mirrors are draped in black material to prevent the deceased spirit from being trapped in the glass. A laurel wreath wrapped in black ribbon hangs on the door to alert passersby to the family’s loss. When the deceased’s coffin is finally carried out of the house, it will go feet first so not to allow the spirit to return. 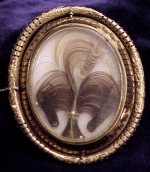 In poorer households there is less pomp after a death. During the 1800s the mortality of children is very high, but the social necessity of a funeral as grand as possible is strong. Many poor families save for funerals for their children while neglecting necessities. Those who can afford it are buried in large, park-like cemeteries with marble statues marking their graves. Those who cannot are buried four to a plot and may be moved at some future time to make way for others.

But the families of the wealthy and the poor may have the same treasured mementos of their deceased: a photograph of the loved one lying in their coffin and a brooch made of the loved one’s hair, both were very popular during the Victorian Era.

4 thoughts on “Tales from the Mist – The Blog Hop”