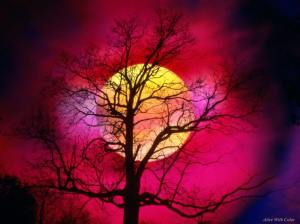 Many years ago, when we were more attuned to the changes in Nature, autumn was a mystical time providing the harvest bounty but also marking the beginning of the darker and colder winter. One night was considered the point where the veil between the physical world and the spiritual world thins–the night now called Samhain or Halloween.

Samhain is a Wiccan Sabbat that honors that change in Nature and acknowledges the coming of winter. Today the secular world celebrates it as Halloween, a time when we still think spirits walk the land.

The ancients would light fires on the hillsides or in gourds at their doorways to keep the shades or spirits away. They would dress in costumes so dead family members would not recognize them and “spirit” them away to the underground. Soul-eaters would go from door to door asking for soul-cakes to eat; another way to keep spirits from returning. Does this all sound familiar?

As The Church gained power, these rituals were demonized as were the people who practiced them. Women who were usually the herbalists and midwifes in a village became partners of the Devil, witches to be vilified and, for millions, executed. Witches and other “evil” images became part of the Halloween legend.

But recently Halloween’s become the second most decorated and celebrated holiday (second only to Christmas – also originally pagan).

While watching Hurricane Sandy’s destruction, I remembered the legends of Halloween/Samhain and how at this time of the year, the veil between the worlds thins. Nature changes from the bounty of the harvest to the chilling snow of winter. From celebration to contemplation.

The veil thinned this week. The veil between us and the path of a storm.
Nature won.
As She always will.
Blessed Be.