About fifteen years ago I went on my first trip to England alone, no tour, no mates, just me. I spent one week at a Bed and Breakfast on Street Road in Glastonbury just a few blocks from the main thoroughfare that goes through the still quaint-to-an-American town.

Glastonbury called to me because of the legends surrounding it. There were stories that the legends of Arthur actually occurred on this land–from the Lady of the Lake to the Camelot itself on a hill at nearby South Cadbury. Some even believed that Jesus walked this ground. The first Christian church in England was established in Glastonbury and grew to be the great Glastonbury Cathedral, now in ruin because of Henry VIII’s Dissolution. 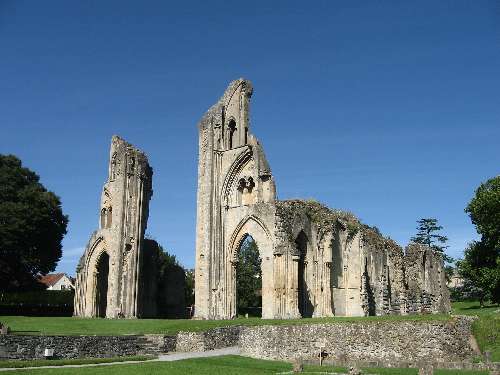 I would leave my B&B every morning and walk through the town. But one morning, I changed my route. A few winding streets above my B&B was Wearyall Hill with the famous tree legend states grew from Joseph of Arimathea’s staff. The  story goes that the uncle of Christ had journeyed to this isle, walked up that hill, and planted his staff in the ground. Unfortunately some thugs have recently taken an ax to the sacred tree.

But when I first saw it, it was full and wonderful. There was the brightness of mystery and history, the spring brightness of that hill, the town, and certainly the hill behind Wearyall…Glastonbury Tor. 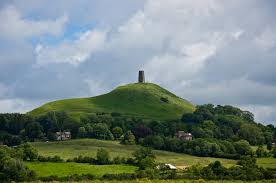 The top of the Tor can be seen for miles around. And on the top sets the remains of St. Michael’s church,  a 14th century church, the second on the site, the first having been destroyed by an earthquake.

In the early morning hours of May 1, to celebrate the pagan/Goddess holiday of Beltane, I trudged my chubby body up to the foot of the Tor and then up the Tor itself. I made it most of the way to the top but had to stop and rest at a bench—and that’s where I stayed. I smiled and chatted with other pilgrims who were headed for the top with lanterns and bells for the celebration. I told them I’d reached “Crone level” and they smiled and laughed and wished me a “Blessed Beltane.” Thus it is with pagan/Goddess worshipers for the most part—a smile and a blessing.

As the morning slowly developed I sat on my crone bench, just happy to be there. I could not see the town below me. There was a spring fog covering the area, making me feel as if I were in the middle of a lake or a sea with only the towering Tor–the “real” Mists of Avalon. I remembered the fantastical term “Dragon’s Breath” and I knew I was witnessing how the ancients came to believe that this area was magical. One part of me realized how one could believe in the breath of dragons. Another part of me knew that, geographically, the area had once been a lake with the Tor an island.

The magic of the land had led to the myths—from the Tor being the home of Gwen Ap Nudd, the King of the Fairies to it being the resting place of Arthur, until he is called again.

That magic had drawn me to Glastonbury then and for two more trips. I am sure that magic will draw me again.

So on this May First, this Blessed Beltane when all worship the greening of the land, I wish you magic…for that is all there is in this world when you really think about it.